Catholic gay rights groups say they are disappointed after bishops rejected a call for wider acceptance of gay people, which had the Pope's backing.

A draft paper, which also urged more tolerance for divorcees who remarried, failed to win two-thirds backing at the bishops' synod in Rome.

The final version says only that anti-gay discrimination is "to be avoided".

Pope Francis has asked for the full draft document, including the rejected paragraphs, to be published.

The synod will meet again in a year's time in an expanded form.

Some 200 bishops had spent two weeks discussing family life issues at the Vatican.

The synod has revealed a fracture line in Church opinion over how to adapt traditional teaching on human sexuality to 21st Century attitudes, says the BBC's David Willey in Rome.

Pope Francis had made a powerful appeal to traditionalists not to lock themselves within the letter of the law, but conservative cardinals and bishops carried the day at the end of the synod, our correspondent adds.

'Very disappointing'
The New Ways Ministry, a US Catholic gay rights group, said it was "very disappointing" that the synod's final report had not retained "the gracious welcome to lesbian and gay people that the draft of the report included".

But it added that the synod's "openness to discussion" provided "hope for further development down the road".

Another group, DignityUSA, said in a statement: "Unfortunately, today, doctrine won out over pastoral need.

"It is disappointing that those who recognised the need for a more inclusive Church were defeated." 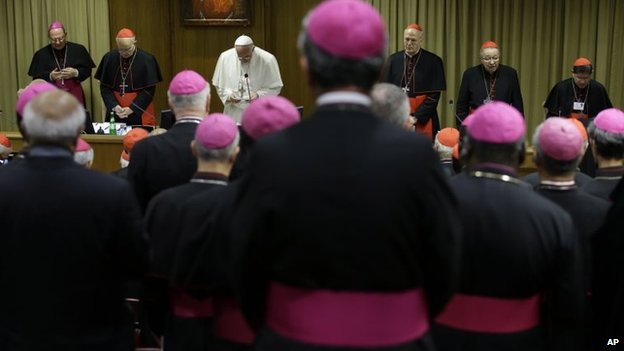 However, Christopher Lamb, from British Catholic journal The Tablet, told the BBC the discussion at the synod had been a "huge achievement in itself".

It was important, he said, to remember that many of the bishops at the synod were from countries where homosexuality was illegal.

"We have now got an acceptance that we need a new language in the Church when talking about gay couples and homosexuality in general," he added.

Speaking after the vote, Pope Francis told attendees he would have been "worried and saddened" had there not been "animated discussions" or if "everyone had been in agreement or silent in a false and acquiescent peace".

In an address, he also cautioned against "hostile inflexibility... and not allowing oneself to be surprised by God".

The earlier draft said homosexuals had "gifts and qualities to offer to the Christian community". 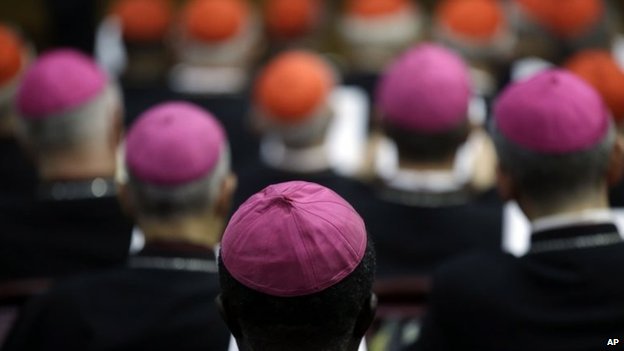 Conservative groups described this as a "betrayal".

Cardinal Wilfrid Fox Napier of South Africa told Vatican radio on Friday "there were two issues that got people 'hot around the collar'".

"One was presenting homosexual unions as if they were a very positive thing," he said.

The second issue related to broken marriages "and the fact that people should be facilitated to get access to the sacraments", he added.

Holy See press officer Tom Rosica said the Pope's request to publish the full draft showed "the degree of maturity" of the discussion.