The star of "Eurovision-2014" Conchita Wurst finally reached Ukraine. Austrian singer visited the capital at the invitation of the studio "Quartal 95" and took part in the filming of the next "Evening quarter."

During the visit Conchita Wurst met with LGBT activists and promised to return to Kiev to take part in LGBT events.

"I'm glad to see you, what you're doing here in Ukraine is incredible. In Austria, we are a step ahead of Ukraine, we already fight for marriage equality. You have to fight for your voices to be noticed, to prove that gay rights are human rights - it's a long way to go, but i'm sure you'll make it!" - Conhita greeted the activists.

Bogdan Globa, executive director of "Fulcrum", expressed his thanks for such kind words: "Open LGBT-celebrities are vitally important to the society, you make LGBT movement more visible and break unjustified myths about our community. I'm so thankful for your contribution in the international fight for rights of LGBT people, it gives us (activists) courage to continue the advocacy here, in Ukraine.

She stated a clear message to the ukrainian society:

"Every person deserves to be treated with respect, disregarding their sexual orientation or gender identity, religion, political views. We all deserve some respect."

Conchita also told us a little bit about her future carrier plans:
"In my future albums i definitely want to be more explicit about what bothers me. And of course i'm very open to collaborate with other artists, it's possible i might do something in future, because i want to develop as a musician and an artist. "

Conchita Wurst visited Kyiv to perform on stage at "Quartal 95", as reported by Таbloid. 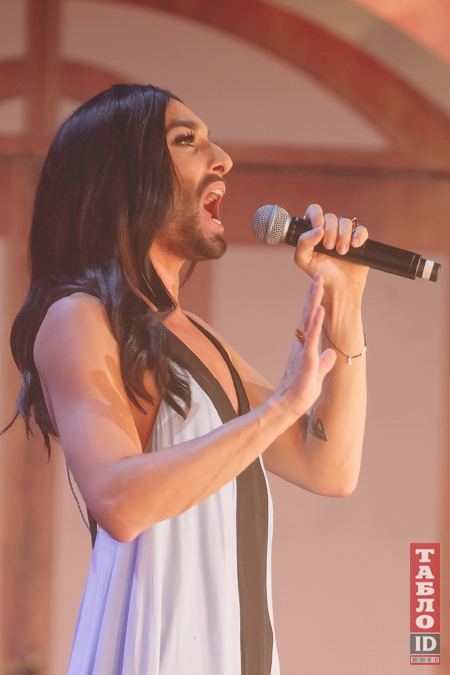